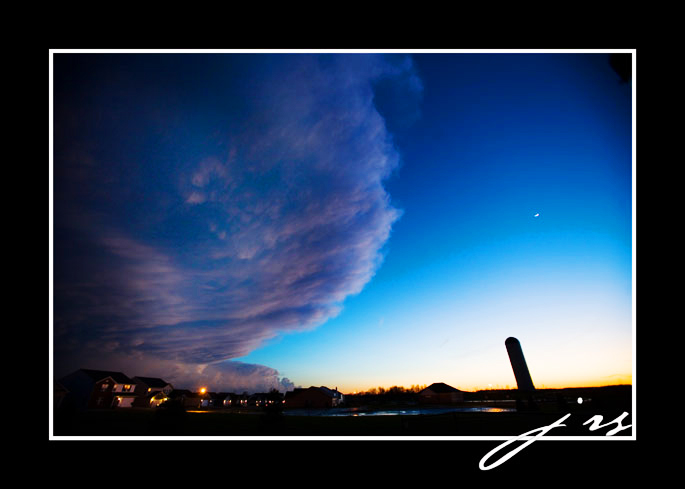 As many of you have probably heard, the midwest has REALLY been under attack with awful weather, lately! Tons of tornados, hail and just all around bad weather! Lately, we have had tornado warnings almost every other day and thunderstorms constantly! Really!

It’s very scarey, especially when you live out in the country! Just this past weekend, a large part of our city was hit with golf ball sized hail for like two hours and TONS of stuff was completely ruined by it! I can’t imagine golf balls flying from the sky, at blazing speed, in the form of ice, ….hitting everything in sight…but that’s really what happened! Well, as strange as it is, the two worst storms that we have had, have either started with the most gorgeous, amazing sky or ended with one. I couldn’t help but be taken back by this because it was just soo odd and I, of course, had to take pictures of these amazing skies.

I know you all are pretty much sick of looking at the Siloh, but until I move, you’re stuck with it! 😉 sorry! Sadly, in the second picture, the clouds that you see were actually the storm clouds that spawned hundreds of tornados and killed lots of people…in Indiana, Illinois & Tennessee. I have never seen as much lightning as that storm gave off. It was literally storming like MAD, stuff was flying, it was a complete white out because of the wind & rain…and then SUDDENLY, it stopped and the sun came out and gave this sky. My husband and I just starred because it stunned us soo much! Tons of people were out taking pictures because it was just soo unbelievable.

I couldn’t help but show these to you…it just shows you how amazing, yet wicked weather can actually be.