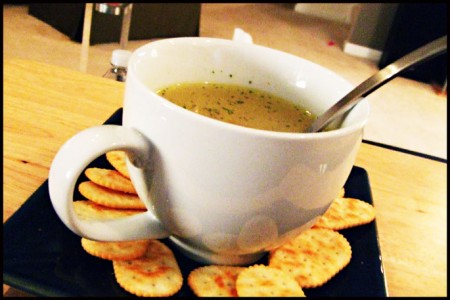 Uhhhhh!! The past few days have been NO FUN because I have been super sick! I got sick on Christmas eve….and sure enough, spent Christmas under the weather! 🙁 It’s pathetic….Zicam, Hall’s and Puffs Plus have seriously become my new best friends….although I’m slightly bitter because the Zicam does not work nearly as well as the commercial says! I’m not over my cold within 24 hours…I’m considering asking for my money back. It was the most sad last night when I had to cancel a dinner party that I was throwing and SOO excited about! I was having all of my high school girl friends over…we haven’t seen each other in a while…and it was going to be such a blast!! I was soo looking forward to it…and I had everything ready…the house was clean, the table had been set, the wine was chilled, glasses and serving pieces were all out and ready…and I even had the food defrosted and the drinks mixed…all I had to do was put the food in the oven! Then, I started to feel really really bad and had to lay down….and within a few hours of the party, I couldn’t even stand up because I felt soo awful! So, as much as it made me sad…I had to call everyone and cancel! It was such a bummer and I’m still soo sad about it! I think it was too much Christmas fun…it just put me over the edge and totally zapped me! At least I’ve been able to catch up on my movies because I can’t move and have to lay on the couch. Just encase you haven’t seen the Break Up….it’s kindof a lame movie. BAD ending. I also got to see the slightly sad and ultra family conflict packed Family Stone for a second time. That is a sad and strange movie, but I kindof liked it. Anyway….lucky for me, I have a really hot nurse named Mark who makes me soup and hot tea…and makes being sick not too awful!! I have a great wedding coming up tomorrow, though….and yes, I’m working hard to medicate myself properly in preparation for the wedding….and i’ll report back with lots of fun pictures! 🙂 In the meantime, wish me a super speedy recovery! 😉