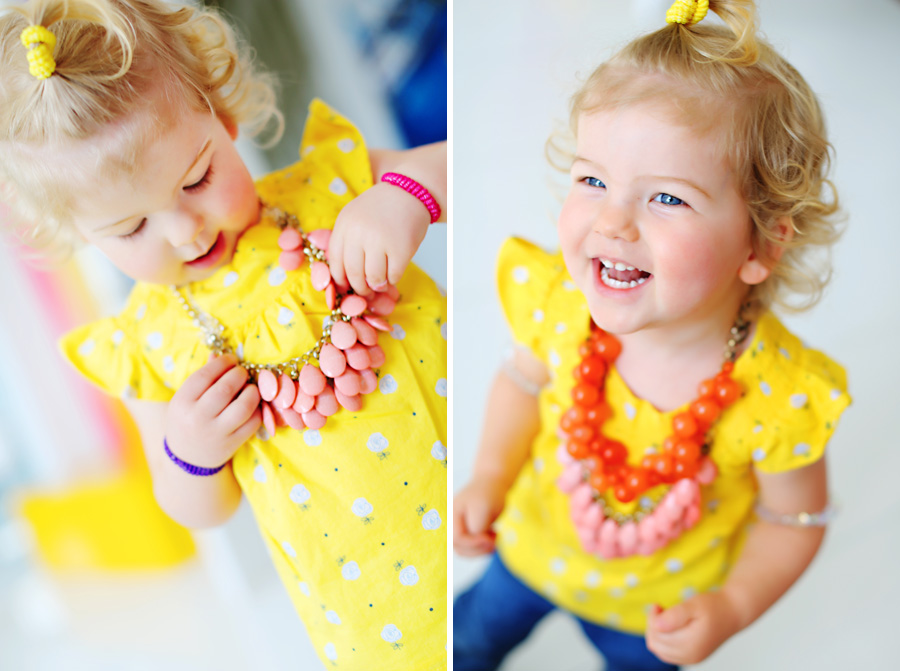 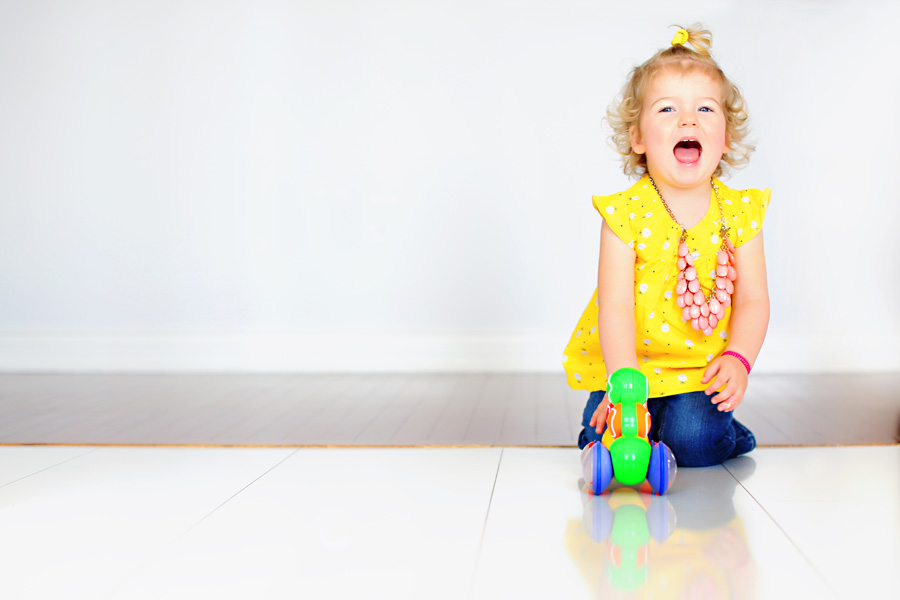 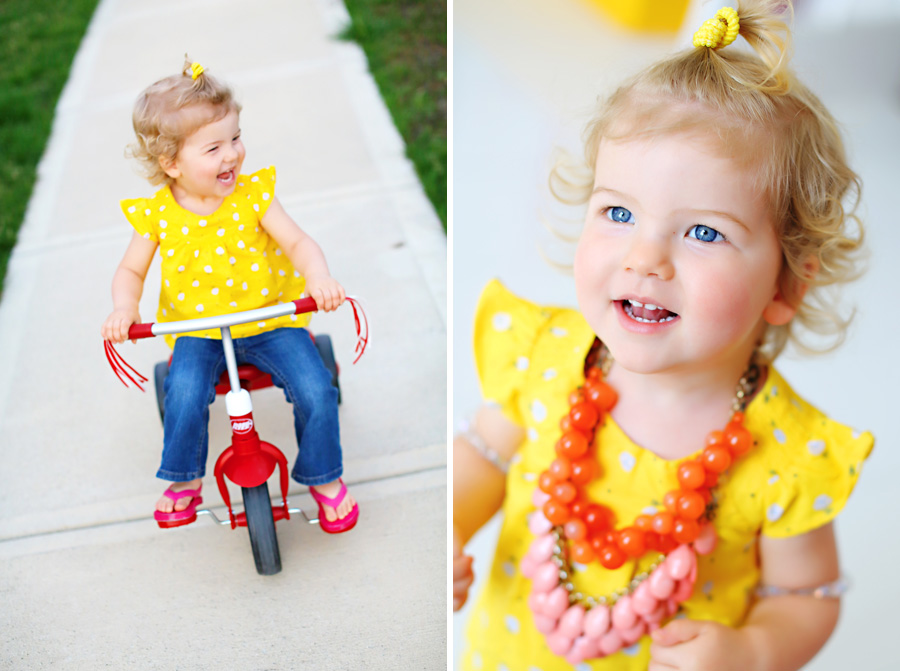 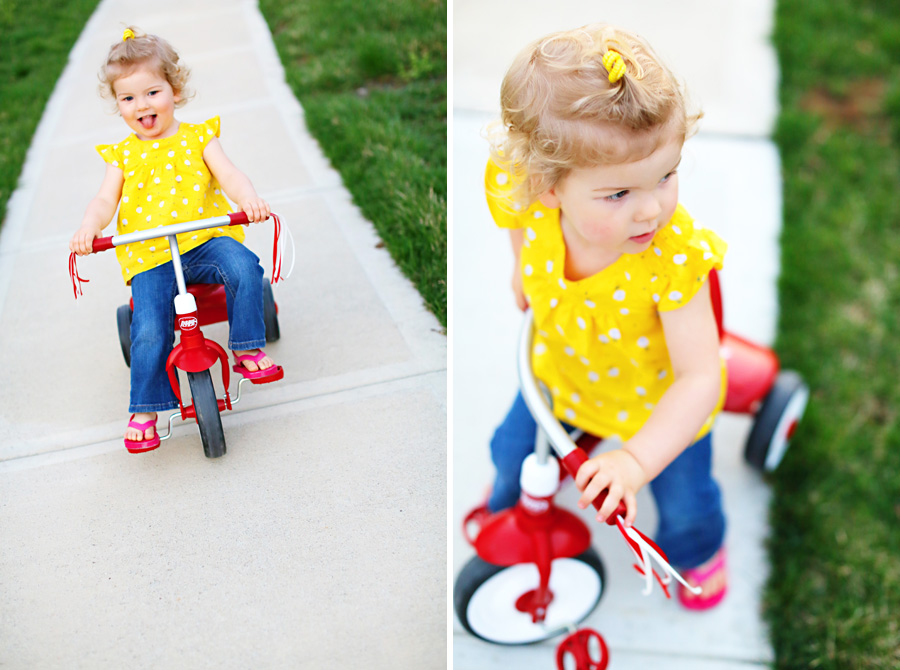 Sophie has spent a little more than one month refining the art of being 2 years old…and she’s doing quite well! She is every bit of 2 that she could be….cracking us up, melting us to pieces with her cuteness and making us wanna scream all at the same time! 🙂

-she no longer talks, she just SCREAMS everything

-when we tell her that we are in charge and she will listen and obey us, she screams NO, I’M IN CHARGE! (yea, we are working on her TONE!)

-when not screaming, she is singing (she hasn’t really stopped since she was 1 year old) AT THE TOP OF HER LUNGS. Every song she knows (and her playlist is quite long, at least 20 songs), on a loop, intermixed, with the words changed…however she can make ANYTHING into a song. The song making the longest run as the top hit of her songlist is WHEELS ON THE BUS. We hear it in our sleep.

-she refuses all help and says I DO IT ALL BY MYSELF at every chance she gets. (again, working on the tone!)

-she spontaneously gives compliments (i liiiiiike your haaaaair, mommy!, your naaaaails are prettttttty mommy, your shooooooes are niiiiice mommy) and if she is complimenting me on something that she can steal, she will promptly steal it after complimenting it. So watch out if she compliments you. Whenever she shows up at home with something that isn’t hers, I have a good idea of what went down…the compliment and steal when distracted tactic. (we are working on sharing and not taking what’s not ours…wish us luck)

-after loving something (a toy/book/song/food/outfit/etc) for weeks and even up to that very moment, she will suddenly annouce that she DOESN’T LIKE IT ANYMOOOOOOORE. (which is often followed by it being hurled across the room) (((yea, we are working on not throwing too.))

-she would wear flip flops 24 hours a day, 7 days a week, if given a choice. in the snow. in the rain. on top of her footie pajamas. to bed.

-she has an uncanny awareness of any plans-to-be-doing-something-fun/candy-being-opened/surprise-coming kind of moments because she will quickly stop all that she is doing, come right to your feet, look at you with this I KNOW YOU ARE UP TO SOMETHING face and say “WHATCHA DOING?? or WHATCA GOT!? or WHATCHA EATIN?”

-she spends 98% of her life with her tongue sticking out. I don’t know why…but I’ve told her the whole story about the fly, too. So far, it hasn’t helped.

-she loves to dance and chooses the FUNNIEST times to bust a move…such as when the song MONEY MONEY MONEEEEY comes on at the beginning of Celebrity Apprentice.

-she, at the ripe old age of 2, have mastered the art of manipulation, distraction (the minute you start to discipline her, she will suddenly start proclaiming that she has POOP and is HUNGRY and has a BOO BOO) and trying to control everything. Then, if you continue to discipline her or try to explain something to her, she starts saying NO NO NO MORE TALKING, MOMMY! NO TALKING!, just so that she can talk over me and get her point across instead of listening to me. I often confuse her for a 16 year old due to this.

-when something crosses her as being COOL…she remembers it for DAYS and likes to make US remember it for days. Yesterday, while playing sitting outside she saw a guy on a motorbike riding through a field, try to jump the mounds of dirt…and she is stilllll talking about him to this minute and has asked me where he is 94 times since then. And when I tell her that he probably went home or I just don’t know, she says (while nodding her head in a VERY sure way, a quick nod with every syllable said) HE WILL COME BACK MOMMY, HE WILL!

-she is NOT afraid of anything, has a scary sense of independence (that is giving me gray hair), is pretty confident that she is 5 (NOT 2) and openly tells people that.

-she is getting curly hair and it makes me smile to see her little fuzzy head of blonde curls walk into my room in the morning with her sleepy eyes and her “flower blankey” wrapped around her like a toga. It’s an even bigger smile if that happens after the hour of 7am and I have not seen her at any time throughout the course of the night.

-she wants every boo boo kissed and then she promptly RUNS to the freezer to get a boo boo buddy! MOMS: if you don’t have boo boo buddies, waltz yourself over to Target and get them, they are GENIUS and magically take the aftermath of a BOO BOO occurance down to seconds. Wish I would have thought to create them!!

-NO is currently her favorite word. (we are working on that too) To everything and anything that she doesn’t agree with/like/want/have to do/or just because she can say it.

-she would live on a swing, if we let her. So would I, so she gets it really honestly.

-I wanna KISS her 24 hours a day and she gets very annoyed and pushes me away and says NO KISSING ME ANYMORE MOMMY, OK!?!

-when she wants something that she knows she won’t get, she whispers it and smiles while whispering it because she MUST KNOW that she turns into the cutest human being that ever existed when she does that and I CAVE IN every time!!

-she can navigate an Ipad better than the people at the Apple Store.

-her absolute favorite letter is O and she will find O’s everywhere and anywhere we go. And she loudly says OOOOOO when she finds one, waving her arms as she points to it.

-She loves babies. LOVES babies. Borderline obsessed. She has many many dolls….but she wants a REAL baby. I told her that we would see what we could do about that. Then she requested a SISTER. and has requested a SISTER every other day since then…and that was about 8 months ago. Never ONCE has she asked for a brother. God, I hope you are listening or I’m afraid things are going to get ugly at our house when that time comes.

-she will get her books out and “read the story” on her own, which means she will make up the story with her own story. And it’s really cute. The stories almost always involve her cousins, going the park, putting on shoes and then someone almost ALWAYS gets put in time out. (well, at least she is paying attention when we discipline, but she’s not gotten to the learning from it part yet)

-she still has a steadfast love of the MOON and searches for it every night, just like she has since we was 10 months old and couldn’t even walk yet. when it’s cloudy, she still throws her hands out in confusion and says “where is the MOOOON?”.

-she has a MEAN temper (which really does scare me a bit for the teenage years) and the SWEETEST disposition, all at the same time….good thing she is 2 or we would have her evaluated for bi-polar.

-because we are coffee addicts and she knows that the very first thing we do every morning is go straight to the coffee maker, she requests coffee of her own. So, every morning, she gets coffee (warm milk with a hint of hot cocoa powder). Then, she will often say “I NEED COFFEE!!!!” at other times in the day/anytime we are at a coffeeshop or the store….and other people look at us like we are giving drugs to a 2 year old kid.

-when telling a story, she gets VERY animated (insert joke: i have NO idea where she gets that. funny! haha!) and tips her head to the side, pops her eyes wide open and nods with every descriptive word she says and trys to tell you the story like she’s convincing you (or herself) that it’s true. Maybe it’s something that you have to see, but take my word, it’s hysterical.

-at bedtime, I always sing her the exact same goodnight song…and when she has met a new friend that day, she requests that their name be added to the goodnight song (when we sing goodnight to all of our family and close friends)…which I think is precious. Then, when I lay her down, I tell her that I love her and sweet dreams…and in the sweetes, softest, sleepiest voice that I’ve ever heard, she says sweeeeeeet dreams mommy. MELLLLLLT.

I told Mark yesterday that when I step back and just watch her, I actually an in AWE, in the deepest form of the word, that we MADE her. and she is OURS. and she is the most beautiful thing I’ve EVER LAID EYES ON. and she makes me CRAZY, and I’m soo in love with her. Even if she is the terriblest of 2’s at the current time! 😉