Hi everyone!!!! I JUST got into the office for the first time since the game and am SOOO HAPPY to report that THE COLTS ARE SUPERBOWL CHAMPS!!!!!!!!! I’ve been soo eager to write this post and share how completely excited I am about the MUCH DESERVED win!! The game was awesome! It started off REALLY bad….that first touchdown was like a pit in my stomach…I felt absolutely sick for the 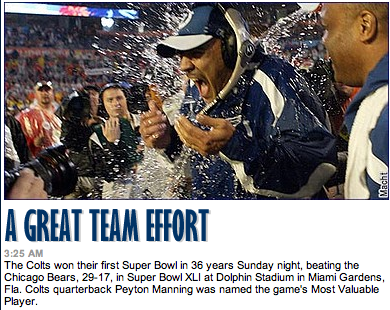 COLTS because I know how desperately they wanted that win and how much they deserved it….as did Coach Dungee and the city of Indianapolis! Then, it turned around and just kept getting better and better!!!!! The rain was just awful….I couldn’t believe how it was just pouring rain on all of those players and people who paid upwards of 6K to have a seat at that game…..and the game obviously was getting really sloppy because of it!

They perservered, though….and showed that nothing was going to stop them and WON THE SUPERBOWL!!!!!!! It’s SUCH a GREAT win for the COLTS and INDIANAPOLIS!!! Seriously, this city has been soo amazing….soo warm and supportive…excited and completely overrun with team spirit!! Every single newscast for the

past two weeks has been about the superbowl…. and I imagine it will only continue! Today, the team returns home and there are rallys and parades for them!! It’s awesome! 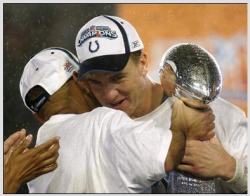 The only downfall is that today is the COLDEST day we’ve had in 12 YEARS….it’s like 4 degrees with a -20 windchill…and it’s really windy so it feels like -20! It’s awful and makes it nearly impossible to be outside! I hope the they still have a great turnout, though…at the rally & parade today!! I’m SOOO happy for the team and the coaches….and for my favorite city in the world, Indianapolis! I truly believe that the COLTS are the MOST deserving team and it was a great, well fought game!! Peyton was totally the MVP and deserved that award! CONGRATS, COLTS!!!! SUPERBOWL CHAMPS!!!