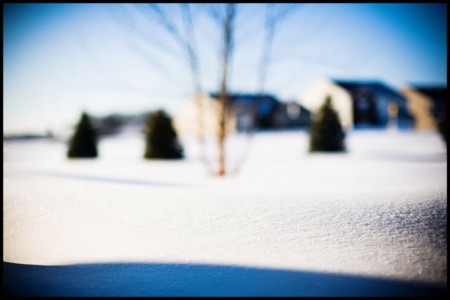 So, we are completely SNOWED IN!!!! We have WELL over 16 inches of snow outside and drifts in excess of 4 & 5 feet ALL around our house & neighborhood!! We live out in the country and that is NOT helpful at a time like this! They’ve been forecasting this major blizzard for days now and they had the whole city in a complete panic…and yesterday morning, it looked like it was a big huge lie because there was very little snow and they had the entire city shut down, including every school, mall and more….and I thought it was all a waste!! Well, by 3pm, I was majorly eating my words because we had at least a foot of snow, an inch of ice & sleet…..and our county was(and still is) under a snow emergency with NO travel allowed. We ran down to our Sis & Bro’s in our neighborhood for dinner last night and got stuck in our own driveway trying to get there…and encountered many roads that were FULLY drifted shut on the way…and thats when we realized that this was a serious deal. My Dad was helping plow our neighborhood and he said it took him 2 hours to just get INTO the neighborhood this morning because there was a 6 foot drift at the entrance! Looks like we’re going to be here for a while….. uhhhhhh! 😉 (the picture above is shot from a window that has at least two feet of snow against it….I can’t open any doors or windows so I must resort to shooting from the inside! ha!)